When building Docker containers, you should be aware of the PID 1 zombie reaping problem. That problem can cause unexpected and obscure-looking issues when you least expect it. This article explains the PID 1 problem, explains how you can solve it, and presents a pre-built solution that you can use: Baseimage-docker.

When done, you may want to read part 2: Baseimage-docker, fat containers and “treating containers as VMs”.

We were early adopters of Docker, using Docker for continuous integration and for building development environments way before Docker hit 1.0. We developed Baseimage-docker in order to solve some problems with the way Docker works. For example, Docker does not run processes under a special init process that properly reaps child processes, so that it is possible for the container to end up with zombie processes that cause all sorts of trouble. Docker also does not do anything with syslog so that it’s possible for important messages to get silently swallowed, etcetera.

However, we’ve found that a lot of people have problems understanding the problems that we’re solving. Granted, these are low-level Unix operating system-level mechanisms that few people know about or understand. So in this blog article we will describe the most important problem that we’re solving — the PID 1 problem zombie reaping problem — in detail. 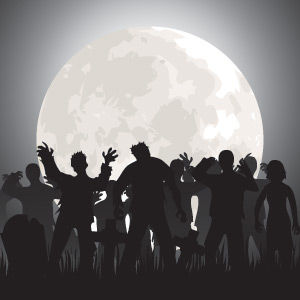 The community seemed to like what we did: we are the most popular third party image on the Docker Registry, only ranking below the official Ubuntu and CentOS images. Recall that Unix processes are ordered in a tree. Each process can spawn child processes, and each process has a parent except for the top-most process. Why does this happen? It’s because Unix is designed in such a way that parent processes must explicitly “wait” for child process termination, in order to collect its exit status. The zombie process exists until the parent process has performed this action, using the waitpid() family of system calls. I quote from the man page:

In every day language, people consider “zombie processes” to be simply runaway processes that cause havoc. But formally speaking — from a Unix operating system point of view — zombie processes have a very specific definition. They are processes that have terminated but have not (yet) been waited for by their parent processes.

Most of the time this is not a problem. The action of calling waitpid() on a child process in order to eliminate its zombie, is called “reaping”. Many applications reap their child processes correctly. In the above example with sshd, if bash terminates then the operating system will send a SIGCHLD signal to sshd to wake it up. Sshd notices this and reaps the child process. 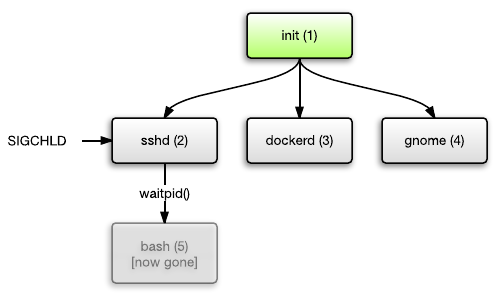 But there is a special case. Suppose the parent process terminates, either intentionally (because the program logic has determined that it should exit), or caused by a user action (e.g. the user killed the process). What happens then to its children? They no longer have a parent process, so they become “orphaned” (this is the actual technical term).

Consider Nginx as an example, which daemonizes into the background by default. This works as follows. First, Nginx creates a child process. Second, the original Nginx process exits. Third, the Nginx child process is adopted by the init process.

This is a very important responsibility in Unix systems. It is such a fundamental responsibility that many many pieces of software are written to make use of this. Pretty much all daemon software expect that daemonized child processes are adopted and reaped by init.

Although I used daemons as an example, this is in no way limited to just daemons. Every time a process exits even though it has child processes, it’s expecting the init process to perform the cleanup later on. This is described in detail in two very good books: Operating System Concepts by Silberschatz et al, and Advanced Programming in the UNIX Environment by Stevens et al. 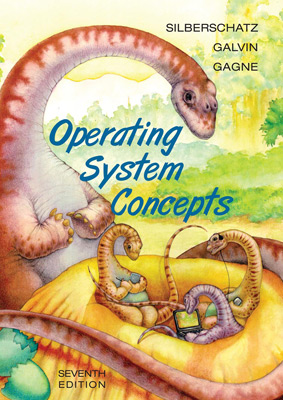 Why zombie processes are harmful

Why are zombie processes a bad thing, even though they’re terminated processes? Surely the original application memory has already been freed, right? Is it anything more than just an entry that you see in ps?

You’re right, the original application memory has been freed. But the fact that you still see it in ps means that it’s still taking up some kernel resources. I quote the Linux waitpid man page:

“As long as a zombie is not removed from the system via a wait, it will consume a slot in the kernel process table, and if this table fills, it will not be possible to create further processes.”

So how does this relate to Docker? Well, we see that a lot of people run only one process in their container, and they think that when they run this single process, they’re done. But most likely, this process is not written to behave like a proper init process. That is, instead of properly reaping adopted processes, it’s probably expecting another init process to do that job, and rightly so.

Let’s look at a concrete example. Suppose that your container contains a web server that runs a CGI script that’s written in bash. The CGI script calls grep. Then the web server decides that the CGI script is taking too long and kills the script, but grep is not affected and keeps running. When grep finishes, it becomes a zombie and is adopted by the PID 1 (the web server). The web server doesn’t know about grep, so it doesn’t reap it, and the grep zombie stays in the system.