I recently took a vacation the same week as the 4th of July and had lots of time to reflect upon my career to date. It was a little shocking to realize I’ve been writing code for nearly 30 years now! I decided to take advantage of some of the extra time off to author this nostalgic post and explore all of the languages I’ve worked with for the past 30 years. So this is my tribute to 30 years of learning new languages starting with “Hello, World.”

The first programming language I learned was TI BASIC, a special flavor of BASIC written specifically for the TI 99/4A microcomputer by Microsoft. BASIC, which stands for Beginner’s All-purpose Symbolic Instruction Code, was the perfect language for a 7-year old to learn while stuck at home with no games. The language organized lines of codes with line numbers and to display something on the screen you “printed it” like this: 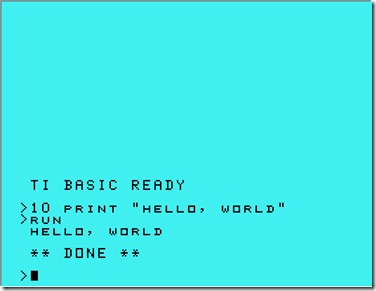 I spent several months writing “choose your own adventure” games using this flavor of BASIC, and even more time listening to the whistles, crackles, and hisses of a black tape cassette recorder used to save and restore data. Probably the most exciting and pivotal moment of my young life was a few years later when my parents brought home a Commodore 64. This machine provided Commodore BASIC, or PET BASIC, right out of the box. This, too, was written by Microsoft based on the 6502 Microsoft BASIC written specifically for that line of chips that also happened to service Apple machines at the time. 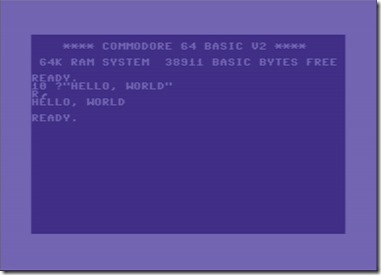 The question mark was shorthand for the PRINT command, and the weird characters afterwards were the abbreviated way to type the RUN command (R SHIFT+U - on the Commodore 64 keyboard the SHIFT characters provided cool little graphics snippets you could use to make rudimentary pictures).

I quickly discovered that BASIC didn’t do all of the things I wanted it to. The “demo scene” was thriving at the time and crews were making amazing programs that would defy the limits of the machine. They would do things like trick the video chip into drawing graphics that shouldn’t be possible or scroll content or even move data into the “off-limits” border section of the screen. Achieving these feats required exact timing that was only possible through the use of direct machine language code. So, I fired up my machine monitor (the name for the software that would allow you to type machine codes directly into memory) and wrote this little program: 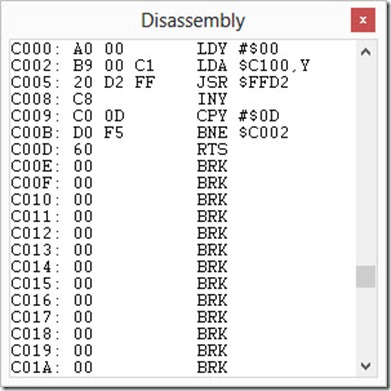 This little app loaded the “Y-accumulator” with an index, then spun through memory starting at $C100, sending the characters one at a time to a ROM subroutine that would print them to the display. This is the equivalent of a for loop (for y = 0; y <= 0x0d, y++) in machine code. The RTS returns from the subroutine. In order to execute the program, you had to use the built-in SYS command that would call out to the memory address (unfortunately, you had to convert from hexadecimal $C000 to decimal 49152, but otherwise it worked like a charm). I had the PETSCII characters for “HELLO, WORLD” stored at memory address $C100 (yes, the Commodore 64 had it’s own special character page). Here is the result: Of course life got a little easier when I moved from raw machine code to assembly. With assembly, I could pre-plan my software, and use labels to mark areas of memory without having to memorize memory addresses. The exact same program shown above could be written like this:

About that time I realized I really loved writing software. I took some courses in high school, but all they taught was a silly little Pascal language designed to make it “easy” to learn how to program. Really? Easy? After hand-coding complex programs using a machine monitor, Pascal felt like a lot of overkill. I do have to admit the syntax for “Hello, World” is straightforward.

I thought the cool kids at the time were working with C. This was a fairly flexible language and felt more like a set of functional macros over assembly than an entirely new language. I taught myself C on the side, but used it only for a short while.

The little program includes a library that handles Standard Input/Output and then sends the text on its way. Libraries were how C allowed us to develop cross-platform – the function was called the same thing whether you were on Windows or Linux, but the library itself implemented all of the low-level routines needed to make it work on the target machine. The above code was something I would tinker with on my Linux machine a few years later. It’s hard to describe if you weren’t into computers during this time, but it felt like you weren’t a true programmer unless you built your own custom Linux installation. By “built your own” I mean literally walked through the source and customized it to match the specific set of hardware you owned. The most fun was dealing with video cards and learning about “dot clocks” and all of the nuances of making the motherboard play nicely with the graphics chip. Anyway, I diverge.

C was not really a challenge for me to learn, but I quickly figured out the cool kids were doing something different and following this paradigm known as “object-oriented programming.” Machine code and assembly are probably the farthest you can get from OO, so the shift from procedural to object-oriented was a challenge I was ready to tackle. At the time you couldn’t simply search online for content (you could, but it was using different mechanisms with far fewer hits) so I went out and bought myself a stack of C++ books. It turns out C++ supports the idea of “objects.” It even used objects to represent streams and pipes to manipulate them. This object-oriented stuff also introduced the idea of namespaces to better manage partitions of code. All said, “Hello, World” becomes:

I headed off to college and was disappointed that the place I went did not have courses that covered the “modern” languages I was interested in like C and C++. Instead, I had to muddle through a course where homework was performed on the mainframe we called “Cypher” using an interesting language called Fortran that actually cares about what column you put your code in! That’s right, the flavor of the language at the time designated column 1 for comments, columns 1 – 5 for statement labels, column 6 to mark a continuation, and only at column 7 could you begin to write real code. I learned enough of Fortran to know I never wanted to use it.

Because I wasn’t much into the main courses I spent most of the evenings down in the computer lab logging onto the massive Unix machines the college had. There I discovered the Internet and learned about the “old school” way of installing software: you pull down the source, build it, inspect the errors, tweak it, fix it, and get a working client. Honestly, I don’t know how you could use Unix without learning how to program based on the way things ran back then so I was constantly hacking and exploring and learning my way around the system. One fairly common thing to do would be execute commands that would dump out enormous wads of information that you then had to parse through using “handy” command line tools. One of the coolest languages I learned during that time was PERL. It doesn’t do the language justice to treat it with such a simple example, but here goes:

At the same time I quickly discovered the massive World Wide Web (yes, that’s what we called it back then … the Internet was what all of those fun programs like Gopher and Archie ran on, and the World Wide Web was just a set of documents that sat on it). HTML was yet another leap for me because it was the first time I encountered creating a declarative UI. Instead of loading up variables or literals and calling some keyword or subroutine, I could literally just organize the content on the page. You’d be surprised that 20 years later, the basic syntax of an HTML page hasn’t really changed at all.

This was an interesting time for me. I had moved from my personal computers (TI-99/4A and Commodore 64 with a brief period spent on the Amiga) to mainframes, and suddenly my PC was really just a terminal for me to connect to Unix mainframes. I also ran a Linux OS on my PC because that was the fastest way to connect to the Internet and network at the time – the TCP/IP stack was built-in to the OS rather than having to sit on top like it did in the old Windows versions (remember NETCOM anyone?) . Most of my work was on mainframes.

I did realize that I was losing touch with the PC world. At that time it was fairly obvious that the wild days of personal computing were over and the dust had settled around two machines: the PC, running Windows, for most of us, and the Mac for designers. That’s really what I believed. I had a roommate at the the time who was all over the Mac and at the time he designed coupons. He had all of these neat graphics design programs and would often pull out Quark and ask me, “What do you have on the PC that could do this?” I would shrug and remind him that I can’t even draw a circle or square so what on earth would I do with that graphics software? I liked my PC, because I understood software and I understood math so even if I couldn’t draw I could certainly use math to create fractal graphics or particle storms. Of course, doing this required having a graphics card and wasn’t really practical from a TELNET session to a Unix box, so I began learning how to code on the PC. At the time, it was Win32 and C++ that did the trick. You can still create boilerplate for the stack in Visual Studio 2012 today. I won’t bore you with the details of the original “HELLO.C” for Win32 that spanned 150 lines of code. 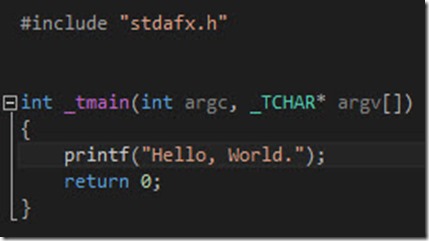 Dropping to the command line and executing this gives us: 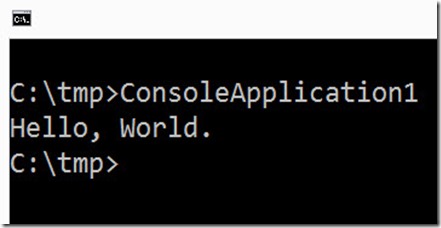 My particle streams and Mandelbrot sets weren’t doing anything for employment, however, so I had to take a different approach. Ironically, my professional start didn’t have anything to do with computers at all. I started working for an insurance company taking claims over the phone in Spanish. That’s right. In the interview for a lower wage job that I was “settling for” to pay the bills while I stayed up nights and hacked on my PC I happened to mention I spoke Spanish. They brought in their bilingual representative to interview me and I passed the test, and within a week I was in a higher paid position learning more Spanish in a few short calls than I had in all my years in high school.